So, I have been here in Granada for just about a week.  It has been one busy week that’s for sure!! I have already seen and learned so much.  On Friday, we had a tour of the Royal Chapel and of the Cathedral here in Granada.  I actually live right down the road from both of them.  The tour was great, the buildings were amazing.  It’s crazy to think, the Chapel was built in the 1500’s and it has the tomb of Queen and King Isabella and Ferdinand, who were the ones who funded Christopher Columbus’s adventure to the new land.  I saw their coffins.  I don’t know why, but I think it’s pretty cool that I am a neighbor to their remains, because they (Isabella) did so much for the history of Spain, and our history, too.  Anyway, the Chapel was really cool, and the Cathedral, built in the 1600’s (it took 200 years to build) was just gigantic.  These are the oldest buildings I’ve ever been in, considering our country isn’t even 250 years old.

I took a couple of pictures as we were on our tour around the city, we did some walking around the neighborhood, too.  We weren’t allowed to take pictures inside either of the buildings.

These first three are of a building that is one of the older buildings in town, it was a hotel type place run by the Arabic population, before the Spanish took over.

Here is the three kings, hiding in the window.  We have Santa Claus, they have the three kings.  They traditionally make some sort of cave like structure in their homes, it doesn’t have to be very big, and as Christmas approaches they have three kings that get closer and closer to the caves.  It’s interactive for the kids, kind of like our “elf on the shelf” but it isn’t used to keep their kids in line….hahaha.

Later Friday night a handfull of the girls in my program went out to a bar just to check it out.  It was pretty fun!! I had sangria, some other girls had some really good mojitos too.  Of course we got tapas with our beverages…gotta love that!

Starting with me going clockwise, me, Jana, Marie, Megan, Stephanie.  I don’t know if they’re all spelled correctly but these are all girls from the Sol program. 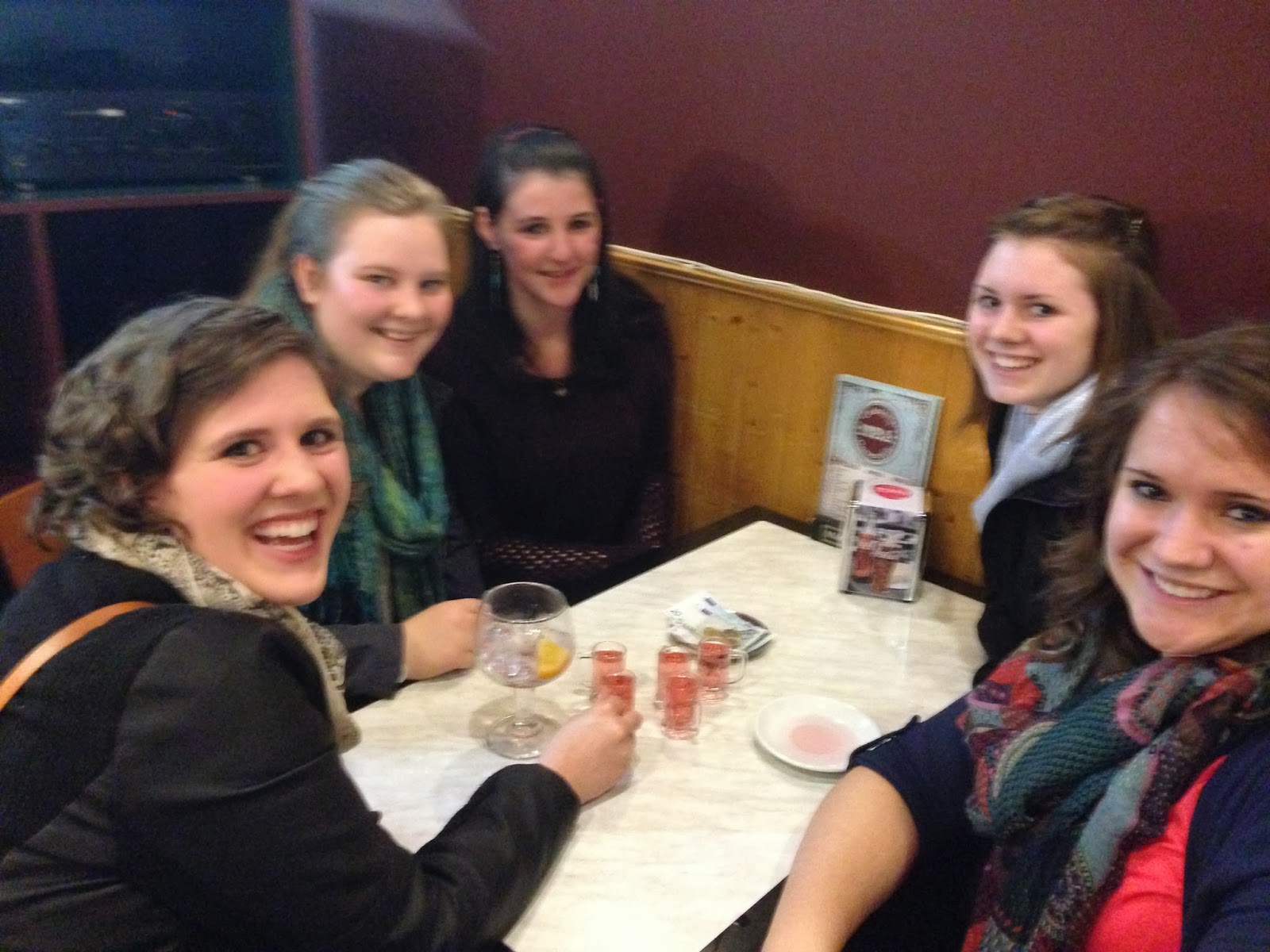 After that bar we walked back and went to a bar called Poe.  We had heard from a few different people that it has amazing tapas, so we wanted to check it out! Conveniently, it is right outside my apartment building.  It is owned by an older English couple, Matthew is the man.  They are really nice!! They talked with us for a while about where we’re from and what we’re doing.  I really enjoyed myself.  They did have really good tapas, too.

On Saturday, Jana and I wanted to look around some more.  We stumbled onto an amazing performance in front of the big Cathedral!  We sat on the front steps and enjoyed the music.  There was even a flamenco dancer for some of the songs! It was really cool.  There was quite a crowd by the time it was over.  I’m attempting to post videos, but I’m not sure if it’s going to work or not so stay tuned.

The people watching is also very good, while watching the performances, this family sat in front of us…the couple and their dog all were rockin’ the dreads.

When we got back home, we had lunch, paella!! It is a very traditional Spanish dish, with rice, seafood, chicken, beef, vegetables, all thrown together in one pan.  Often cooked over fire.  It was delicious!!

Saturday night, Megan and I went out to the discoteca, which is kind of a dance club.  It was crazy!! There were soo many people there! It was really fun.  We did a lot of dancing and were able to speak Spanish with some locals that were there.  In Spain, it is traditional for the young adults to go out to bars around 12-12:30 and socialize for a few hours, and then at like 3am they go to the discotecas and dance and have fun until 7 or 8 in the morning.  This is what is considered a typical night out…..I don’t know but I don’t think I can keep up!

This morning Jana and I went on a very long walk to a part of Granada that we haven’t been to.  We saw the Plaza de Torros, which is where they do the bull fights.  It was a pretty impressive building!  The rest of the pictures are from the Plaza de Torros and from around Granada on our walk.

Well I need to do my homework and eat dinner, audios!